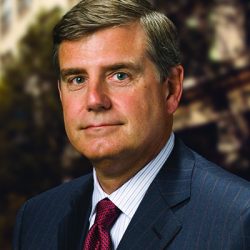 Jeff Smith is a seasoned sports, entertainment, and gaming executive with expertise in venue management and success in working with regulators and lawmakers. Throughout his career, Jeff Smith has guided organizations through rapidly changing business environments. His leadership has enabled companies to capitalize on opportunities requiring significant change in strategies, markets, and scale.

In 2001, Mr. Smith joined the senior management of Centaur Gaming with the responsibility to position the company for growth. As the company’s representative to regulators, Mr. Smith won a reversal of the sanctions within seven months, allowing the pursuit of gaming related opportunities in several states and Canada. During his tenure, Centaur grew from a few employees and no operations into a company that raised $1 billion in capital, generated annual revenues of $250 million, and had more than 1,000 employees.

From 1983 to 2001, Jeff Smith performed several key roles at Churchill Downs Inc. and was instrumental in the company’s evolution from a single-location operation to the premier, multi-state industry leader. During a period of great change in the industry, Mr. Smith personally worked on many of the most significant industry innovations. Through Smith’s progressive leadership responsibilities during his 18-year tenure, Churchill Downs successfully navigated new business paradigms, including technological opportunities, market expansion, introduction of gaming and facility enhancements to maximize the entertainment experience.

Mr. Smith graduated from the University of Kentucky with a B.A. in Accounting and earned his CPA (Kentucky).